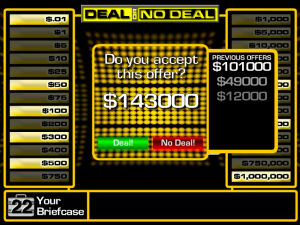 Deal or No Deal at Starfall Zone | PLAY NOW!

Play the flash version of the famous reality game Deal or No Deal!

A flash game based on the hit show on NBC that aired on December 2005. Great game that will get you hooked instantly. – After picking your case, select six of the remaining 25 cases to reveal, one at a time. You will get a “phone call” from “The Banker”, who makes an offer to buy the contestant’s case for a certain amount, based on the cash amounts still in play. If you accept the buyout, the game then ends, and the contents of his/her case are revealed (along with the whereabouts of the top remaining prizes). Should you refuse the offer, you then must choose five of the remaining cases to eliminate from consideration. Another deal with The Banker is made, and play continues as before. Try to get $1,000,000!

Harry Potter and the Sorcerer's Stone
by J.K. Rowling

Charlie and the Chocolate Factory
by Roald Dahl

The Lorax
by Dr. Seuss

Share book reviews and ratings with Starfall Zone, and even join a book club on Goodreads.